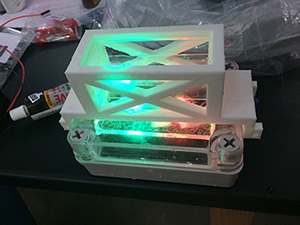 The MBL lightbox is a reusable, submersible, battery-powered narrow-spectrum LED illumination chamber with a 3D printed, environmentally exposed microscope slide holder that was designed as a low-cost solution for wave-length specific in situ enrichment of phototrophic microorganisms. The method selectively enriches for microorganisms that thrive under the provided light regime(s) but within the natural chemical environment of their native habitat. It was developed by Sebastian Kopf and Sean Kearney at the 2015 MBL Microbial Diversity summer course. 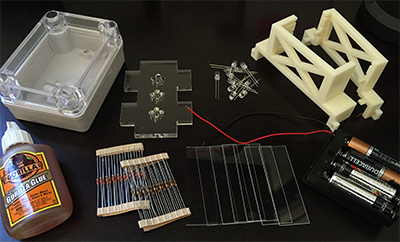 How to wire the LED circuit?

In this lightbox, we are using 4x AA batteries as the power source which provides a total of 4x 1.5V = 6V to drive our LEDs. To check which/how many LEDs we can power with this, we need to know the characteristic “forward voltage” of each LED (the approximate voltage drop across the LED). This voltage mostly depends on the color of the LED, for example red LEDs will typically have a forward voltage of 1.8-2.2 V while green LEDs might have 3.2-3.8 V. You can get the forward voltages from your LED datasheets (often denoted Vf) or estimate them from the typical values for the color in use (e.g. by looking up LED voltages on Wikipedia). 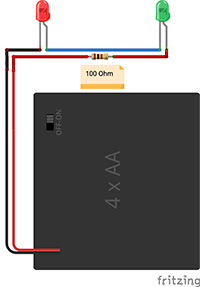 To maximize battery life, it is best to wire the LEDs in series. This makes it easy to limit total current and the circuit has only 3 components: 1) the battery pack to power the circuit (here 6V), 2) a resistor to control current flow, and 3) our LEDs. For an example circuit, we are including one red LED (forward voltage ~1.9V) and one green LED (forward voltage ~3.3V). To calculate which resistor to use, determine the leftover voltage in the circuit \(\left(V = 6\text{ V} - \sum V_f=6\text{ V} - 1.9\text{ V} - 3.3\text{ V} = 0.8\text{ V}\right)\), then decide what current to run at. Typically LEDs are rated at a maximum current of ~20mA but you can always run an LED with less current to reduce brightness and increase battery life. For the example circuit, we will aim to run at 10mA which is not maximum brightness but still quite a bit of light for bacterial phototrophs. Using Ohm’s law, the required resistor is \(R = V/I = 0.8\text{ V}/10\text{ mA} = 80\text{ Ohm}\). Resistors are usually available at specific values, a useful set that covers many scenarios for the light box includes 10, 22, 47, 100 and 220 Ohm resistors. Rounding up to the closest resistor for the example circuit means we’ll go with the 100 Ohm resistor. 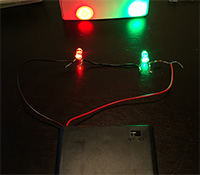 Wire the circuit as illustrated in the diagram. Polarity matters for LEDs so the positive pole (usually red wire from the battery pack) has to connect to the anode of the LED, which is typically the longer lead (testing which one is the right one by swapping the connections will NOT hurt the LED, it just won’t light up). Make sure that the wiring is correct by turning on the battery pack, all LEDs in the circuit should light up (note that you will not see IR LEDs with the naked eye). If not, check for any loose wiring, accidental shorts (wires touching), correct polarity on the LEDs and sufficient battery charge. To keep connections tight and insulated from each other, twist wires together firmly and wrap with a layer of electrical tape or heat shrink.

How long can I run the lightbox for?

The total capacity (=lifetime) of a battery depends strongly on the material and the discharge rate. At low currents (<100mA), decent quality AA alkaline batteries, for example, typically have a capacity of ~2200 mAh (but they perform much worse at high discharge rates). This means that if you run your LED circuit at 10mA, your battery pack will last for 2200 mAh / 10 mA = 250 hours, or roughly 9 days! That is a pretty solid amount of time for in situ phototroph enrichments. If you want brighter LEDs and are running at 20mA, you will need to replace the batteries after ~4.5 days.

Additional advice on the circuit 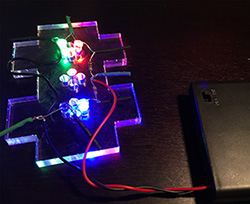 This tutorial is available online at kopflab.com/resources/lightbox/.