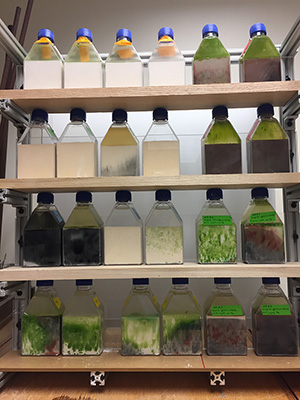 Winogradsky columns, named after famed Russian microbiologist Sergei Winogradsky, are a great educational exercise in environmental microbiology. In the team-based-learning (TBL) Geomicrobio class at CU Boulder, every group of students sets up a series of Winogradsky columns at the beginning of the semester and observes and discusses how they develop over the course of the term. The columns help teach about photosynthesis, microbial metabolism, and biogeochemical cycling in a very hands-on manner. The students themselves decide what field sites to sample from and which experimental conditions to explore. The experimental setup uses diatomaceous earth for greater contrast as proposed in an article by Thomas Benoit (Increase the Visibility of Microbial Growth in a Winogradsky Column by Substituting Diatomaceous Earth for Sediment. J. Microbiol. Biol. Educ. 16, 85–86, 2015.) and uses a simple ceiling light panel for irradiation.